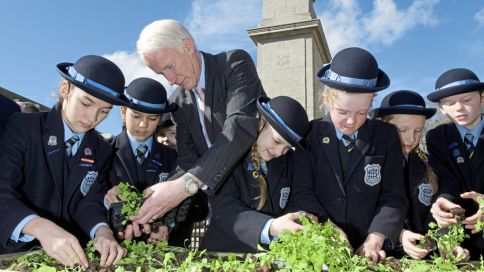 Pupils from Helvetia House School, the closest school to the monument in the Parade to the dead of two world wars, were joined by the Lieutenant-Governor, Air Chief Marshal Sir Stephen Dalton, and Lady Dalton. More poppy fields will be planted around the Island and the British Isles in the coming months.

A spokeswoman for the Royal British Legion in the UK, which devised the initiative, says that, 100 years on from the end of the First World War, the organisation will be encouraging the nation to say thank you to those that gave their lives during the war, as well as the families that were left at home.

Poppies became the symbol of national remembrance in the 1920s, as they bloomed in the battlefields of Belgium and northern France during the Great War.

A similar project in 2014 to mark the outbreak of the First World War saw poppies planted across the nation and in Jersey.

Helvetia House head teacher Lindsey Woodward said: ‘Our school is a stone’s throw away from the Cenotaph and each year we are actively involved in helping the pupils remember the end of the First World War and, indeed, all wars and conflicts which have occurred since.

‘We feel it is important for the girls at Helvetia to understand past history and some may well have members of their own family who have been involved with the military services and want to understand better than they already do what happened and why.

‘The idea of our girls planting a poppy in memory of others is such a great thing for them to be involved in and one which they will remember for the rest of their lives.’

To support the project, local business Jersey Plants Direct, which supplied the seeds for Tuesday’s planting event at the Cenotaph, has also formed a partnership with the Royal British Legion to sell packs of Flanders poppy seeds in the Island and online throughout the UK.

Charles Woodrow, president of the Legion’s Jersey branch, said: ‘One hundred years on from the end of the First World War, the Royal British Legion is encouraging communities to come together, recognise the contributions and sacrifice of those involved in the war and say “thank you in 2018”.’