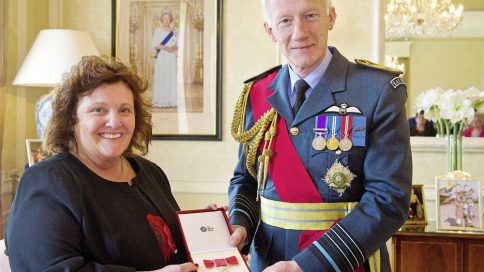 His Excellency and Lady Dalton hosted an Investiture for Miss Carole-Anne Robins, BEM at Government House on Friday, 6 April.

Carole-Anne Robins began raising money for the Special Care Baby Unit in 1999 after they saved the life of her daughter, Alexis, when she was born several weeks premature. Since then, the 59-year-old, together with her partner, Roger Rondel, and Alexis, has raised more than £14,000 for the unit, to enable vital equipment to be bought.

In addition, the family have raised money for numerous other local and national charities through regular car boot sales and other events.

Presenting the prestigious award on behalf of the Queen, the Lieutenant-Governor, Air Chief Marshal Sir Stephen Dalton, spoke of the many organisations and people who had benefited from Miss Robins’ tireless hard work, and thanked the many people who had supported her in her fundraising.

About 40 friends, family and supporters attended the ceremony, which was followed by a reception at St Martin’s Public Hall.

At the reception, St Martin Constable Michel Le Troquer said that only about 300 British Empire Medals were presented nationally each year. He praised former Prime Minister David Cameron for reintroducing the medal – which recognises meritorious civil or military service – after it had been stopped by John Major’s government in 1992. Charities which have benefited from the fundraising include Jersey Cancer Relief, the Jersey Heart Support Group, the Donna Annand Melanoma charity and the Grace Crocker Family Support Foundation. The family also helped to invent fundraising mascot Chocolate the Charity Bear, which appears at many local events.

Miss Robins is also president of the FCJ Past Pupils’ Association.