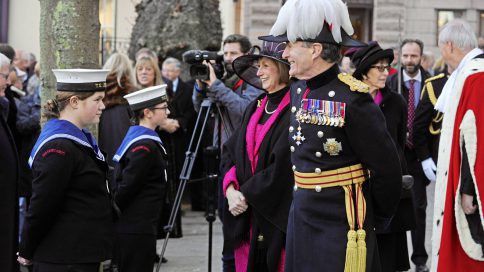 His Excellency said that representing the Queen in Jersey had been the ‘greatest honour’ of his career as he bid farewell to the Islanders.  He spoke fondly of his five year term of office and he would miss the ‘remarkable community’ of Jersey.  He made these comments as he addressed Members in a special sitting of the States in front of a packed public gallery.    A short time later His Excellency and Lady McColl a contingence of cadet and Parish standard bearers made a guard of honour as they met dozens of Islanders in the Royal Square.