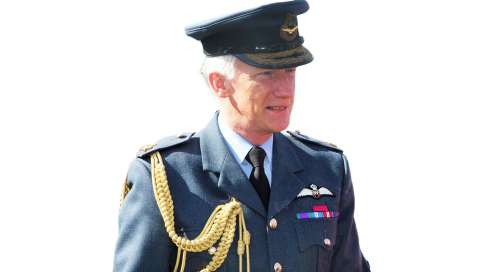 Press Release from the Bailiff’s Chambers:-

The Bailiff is very pleased to announce that Air Chief Marshal Sir Stephen Dalton GCB LLD(Hon) DSc(Hon) BSc FRAeS CCMI is to be appointed as Jersey’s next Lieutenant Governor and will assume office in early 2017.

Sir Stephen joined the Royal Air Force in 1976 after graduating with an Honours degree in aeronautical engineering from Bath University. During the height of the Cold War, he flew the Jaguar fighter/bomber on three tours in the tactical reconnaissance and ground attack roles. He subsequently commanded the RAF’s Jaguar Force for two years from September 1997 and was later appointed as director of the Eurofighter (Typhoon) programme assurance group in the Ministry of Defence with responsibility for ensuring that all elements of this key international defence programme resulted in a cost effective and safe introduction to service of Typhoon.

Sir Stephen was appointed to the position of Capability Manager for Information Superiority, with defence wide responsibility for the assessment, budgetary management and delivery of defences intelligence and communications capability and in April 2004 was appointed Controller Aircraft on the Air Force Board. He was chosen to be the strategic personnel director for the Royal Air Force in May 2007 and was appointed Chief of Air Staff in July 2009, a position from which he stood down after a highly demanding, extended and successful tour in July 2013.

Sir Stephen is married to Anne and has two children. He lists his interests as including sports, theatre and history. He and Lady Dalton have been over to the Island on a number of occasions in the past, especially during the week of the Jersey International Air Display.

Sir Stephen, on receiving confirmation of his appointment, has made the following comment –

“I am honoured and delighted to have been appointed by Her Majesty as the next Lieutenant Governor of the Bailiwick of Jersey. The people of Jersey have always made my wife and I most welcome during our visits to the island over many years and we look forward greatly to working with and living amongst all of the residents in the years ahead. Once I take up the appointment, I would intend to meet as many of the Jersey people as possible and by listening to and learning from them, to share productively in the life of this jewel in the Channel Islands.”

“I am very pleased indeed that Sir Stephen Dalton is to be appointed as the Island’s next Lieutenant Governor and I very much look forward to him taking office in the first quarter of next year. He has had a highly distinguished military career in the Royal Air Force, and I know that he and Lady Dalton will receive a very warm Jersey welcome from the local community when they arrive. I have no doubt they will find their time in Jersey to be both enjoyable and rewarding.”